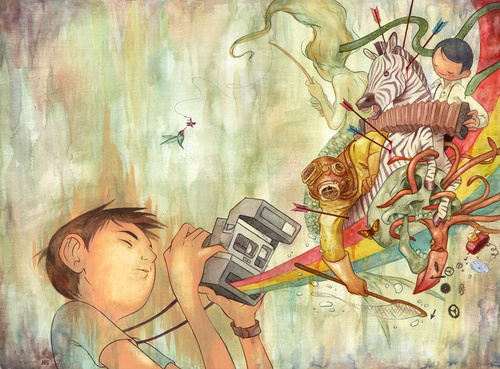 Fantasising imagination one adds extra alluring feather
One is being acknowledged as the cap uniqueness triggers
Imagination gets wings to fly over scenic hilltops
Sugar-coated thoughts hover after mouthwatering lollypops
Landing on islet encircled by deep blue lagoon
Lofty wishes dance in glee teasing the silvery moon
Navigation by the mind is endless adventure sans any bounds
Imagination crops up there when iconic ethereal feeling moulds
Imagery, emotional upheaval builds mounting pressure umpteen
Surreal urge breeds familiar havoc quite amusing but unseen
Imagination when gets the Midas touch of fancy
It gets the shape , aura and perfume to cherish proficiency
Fancy is the outer crust of the oyster that sustains
Imagination is the priceless pearl that brings dividends
When both join hands the seed of eye-catching creativity germinates
If both fall apart by fencing pure novelty terminates

About the contributor: Dr. Alok Kumar Ray is a lecturer by profession who teaches

political science to undergraduate and post graduate students.As a bi- lingual poet( Odia and English) many poems written by him have been published in various national and international magazines, journals,periodicals etc.Now he resides at the district headquarters of Jajpur in Odisha state of India.He is a regular contributor of  many online national and international poetry groups.